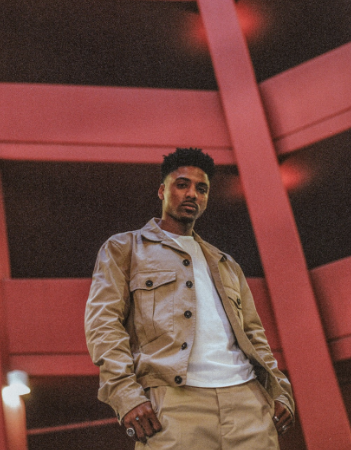 April 24, 2020 — Los Angeles, CA — YG artist MITCH has today released a brand new offering in the single “Like This” featuring R&B darling Ann Marie. The sultry and melodic track shows off MITCH’s (Interscope Records) proven talent for an insatiable hook and songwriting that transports the listener to a specific time and place. “Like This” takes us on a journey of our protagonist who implores his lady love to consider a romance that only he can provide. Rounding out the insatiable track is the dulcet tones of Chicago native and fellow Interscope artist Ann Marie. Teased all week by MITCH, the single hit DSPs earlier today and will have an accompanying visual release next week!  Stay tuned for the video, but till then play and add “Like This” to your playlists.

“I wrote the record about a girl I was dealing with at the time. We had recently broke up, and it inspired me to write “Like This”. I used it as an outlet to let her know she would never find another love like this. And speaking on his collaboration with Ann Marie, Mitch elaborates: “I was on tour with Dani Leigh in Chicago last year and my homegirl put me on to Ann Marie. I thought she was talented and had a real genuine appeal about her. And thought she was the perfect fit for the female perspective.” — MITCH

Born in Houston, TX and raised in Pheonix, AZ, Mitch has always had a talent for creating a mood making music. A chance meeting between Mitch’s friend, Olympian Will Claye, and rapper YG allowed for Mitch to submit a collection of beats which resulted in YG’s “IDGAF,” a sinister West Coast cut that has garnered over 66 million views on YouTube. In 2015 when he reconnected with YG, selling him the beat for “I Know” which ultimately landed on YG’s Red Friday mixtape, he contributed not only the hook but his vocals, too. YG signed Mitch to a publishing as a producer in 2017 and a year later Mitch moved to Los Angeles, CA and released his seductive debut Space via YG’s 4Hunnid imprint (Interscope Records).  This Summer, Mitch will release the follow up project, Better For You. Where Space was about finding himself and his own space, Better For You is about sharing and being the best version of yourself for the one you love. Better For You sees Mitch collaborating with music’s uncovered gems like Waves and Ilham alongside bigger names like Ty Dolla $ign, Yung Pinch and fellow R&B darling, Anne Marie.